————-
The good ship H&S has recently returned from a month having THE best fun at 11 shows at Grassington Festival, Oakwell Festival, Durham Brass, Scarborough Seafest and Underneath The Stars.

Prior to that, I started this blog-post, to reflect on where we’re at in the making of this next Hope and Social record. Now that we’ve a minute to catch our breath, I thought I’d better return to it.
————-

Back to the album blog!

————-
As of the start of July, we’re five weeks in to the making of the tenth Hope and Social album and having spent June and the first three days of *The Hottest July since records began* holed up in the natural refrigerator that is The Crypt studio, we’re all a little bit frazzled, a bit sketchy.

As I’ve hinted at before, we wanted to make this record in a different way to the albums we’ve made since (and including) April. For the past 5 years (and out of necessity) everything album wise has gone down so speedily. Most of what you hear on April, Sleep Sound, Dancing Days, it’s based on a single take; a band playing in a room… and no matter how much fun that is, you can’t just keep doing the same things if you want to grow. A band is [ridiculous analogy alert] like a shark. It has to keep moving to stay alive. Plus you’re gonna have to try different things if you want to get different results

For our sanity, and for our own development, we’re using different approaches to different ends in the making of this record. Plus there’s a new person in the band, and Fletch brings with him (as part of his toolkit): a whole new bunch of energy, and new personal tastes and preferences [yes Fletch, we are KEEPING the ferhucking gunshot sample!]

All this change means finding our feet again with new ways of doing things. It’s ‘ellish exciting some times, though conversely it’s meant new, surprising and different problems to deal with too. We’re making different choices in terms of instrumentation, arrangement, process… and in terms of the whole sound we’re going for. You may not associate… handclap and finger-snap samples, and 80’s keyboards, a drum machine, and three drummers, and four singers at once, and double-tracked lead vocals, and looping stuff, and kids’ percussion, new Rickenbackers (yay!), and a vocoder with Hope and Social… so there’ll be something new for y’all [grins]. But one thing’s for sure… it’s taking longer. Soooooo

Yeah… it’s going to take a little while longer to stew this one. So our original plan of touring the new record in October just wasn’t going to fly. So we’re to do a few select dates in October/Early Nov, and continue the new record in the time we had blocked out for touring. We’ll have more details coming on those dates shortly but for your diary’s sake… 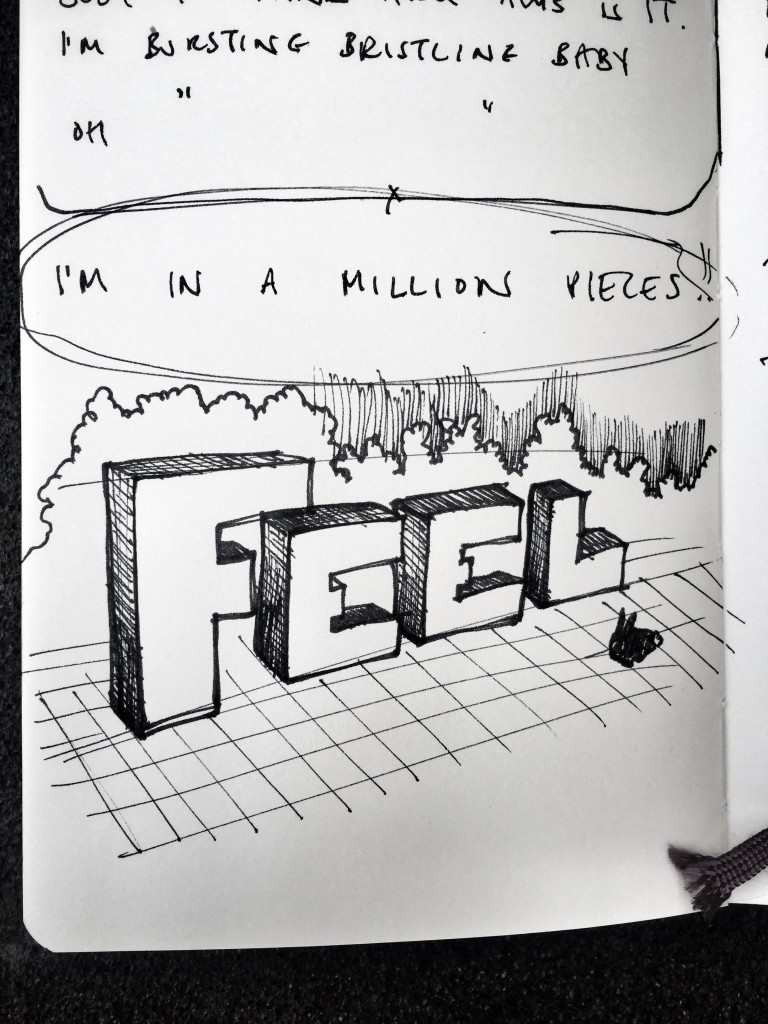 Traditionally at this point in the record (we’ve currently got 6 and a half songs on the boil… some we’ve yet to touch… some we’ve yet to write), I’m tweeting and sharing snippets of songs – vocal bits, a brass riff, some distortion… but partly because all this seems so new, I feel like I want to hold it close to my chest.

I think it’s also that we’ve done such a lot of project work over the past few years where we’re teaching H&S music to other people, and sooo much sharing of our music and our process with that I feel a somewhat protective over letting anything out in to the wider world… and traditionally that’s not a very Hope and Social way of doing it.

So to try and compensate, I thought I’d write this blog-post, show you some of the contents of Si’s black book of ideas… and try to let you into the process a little bit this way.

What you can probably gather is that there’s stuff in there to do with family, we talk of the north, of living life *hard*… and of that urgent, prickling sensation of overwhelming love.

Now, as I’m re-reading what I’ve written above, I can’t help but think I sound like a ridiculous muso/hippy searching, Mighty Boosh style, for “New Sound“, but I think it’s fair to say we’re all very excited about the direction it’s going in. It may well be that when we do finally release this record that no-one so much as bats an eyelid and thinks it’s just another bunch of your standard, common or garden Hope and Social fayre, but right now and to us, it feels like a new thing… and that’s exciting.

So if you can bear with us, it’s going to be the 1st half of 2016 when we release this next record.

If you’ve any thoughts or questions, or (and god know we need ’em) any words of support… please do ask/comment below, or on twitter/facebook. We’ll try and reveal as much as we can during the process… without revealing too much. [grins]

Right, I’m off… but here’s a few more festival memories that you may enjoy.