Right. Well I think all we need to do to explain the origins of this track is to say that the working title was FunmasterJazz. Yes. Indeed. This track came entirely from a jam whilst we were in the writing phase and, until a week before the final mix only consisted of the riff. It was loads of fun to play and although it sounded great on the demo it was lacking any substance really – James (trumpet player, NOT the James of the title) was convinced it was shit, kept asking “really?” every time we mentioned reworking it. It was only the riff though and was way lighter – had a sort of pseudo-80s-Bowie feel without any of the good bits. Hux’s arpeggio guitar chord at the start may have been the inspiration for James’ studio poster as well: 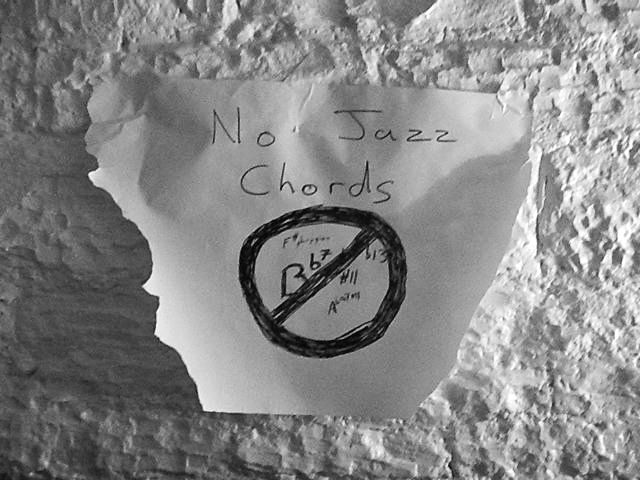 We had the track lurking in the shadows waiting to be finished and we also felt we had a gap in the album for something pretty forceful, straight ahead and with a notch of aggression. With only one day of writing/recording left in the somewhat tight schedule we just all got in the room together and bashed through it – Ed setting the tone for the session by saying we had to imagine we were Nick-Cave-meets-The-Fine-Young-Cannibals. Probably turned out to be the most chorusy-chorus we’ve ever written – literally in a couple of hours – and I think the riff is killer. I do wish we’d had time to maybe add a bit more “dust” to it – little sonic things and extra harmonies etc but what you hear on the record is essentially a live take (for all instruments) with a vocal over the top. And the vocals were recorded (as with Caught in the Wake) with a handheld mic, monitor speakers on, standing on top of the sofa. 3 takes. Bosh. We’ve vowed never to record “loud” vocals in any other way again.

James. I think he’ll know who he is if he ever hears it. He let us down. Sad.

This track is pretty great!

Checked out your blog from comments you left at Bandcamp (http://blog.bandcamp.com/2010/04/01/name-your-price-physical/)…

Definitely my favourite track on the album. Beyond cool.